Air Liquide and Hyundai Motor France announce the handover of the keys to the two first Fuel Cell Electric Vehicules (FCEV) registered in France. These hydrogen-powered cars have a range close to 600 kilometers and their only emission is water.

This delivery of two of the first mass-produced fuel cell electric vehicles represents an important landmark in the development of the hydrogen energy industry. Highly involved in this field, Air Liquide wanted to be the first to use these vehicles in France. Air Liquide’s hydrogen filling stations can fill the vehicles’ tanks in under five minutes. This high-performance technology is already safe and available.

The two Hyundai ix35 cars are part of a series of 1,000 vehicles that the constructor will build by 2015 in its factory in Ulsan, South Korea. Hyundai Motor is the first automobile constructor to mass-produce fuel cell electric vehicles.

Hydrogen energy is an innovative solution that helps to preserve the environment. The creation of a hydrogen distribution infrastructure is one of the main challenges for the commercial launch of fuel cell electric vehicles. Air Liquide is contributing to the emergence of this sector in the transportation industry by supporting the creation of the necessary distribution infrastructures worldwide: the Group has already designed and supplied over 60 hydrogen filling stations around the world.

It is on its site in Sassenage, near Grenoble, that Air Liquide received these first fuel cell electric vehicles registered in France. For 15 years now, this site, which is dedicated to exploring new markets through technology and innovation, has been designing and developing all the technologies required to roll out this new hydrogen energy industry. 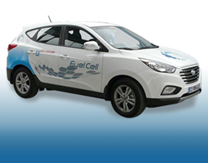 Scott Medical Products has a team of engineers, scientists and supply chain managers capable of creating solutions to save you time and money. Scott uses state of the art technology to meet all customer requirement. Need further information or a quote? Contact our Team.

For Press or Media inquiries